Making sense of data in education

How are the term and hashtag ‘MOOC’ and ‘#MOOC’ used on Twitter? How is the agenda for discussion set? What are the prominent topics and themes in MOOC discussions? Who are the main actors in these discussion networks?  To answer these questions you need to analyse tweets, which is exactly what we did.  Collecting all tweets using ‘MOOC’ or ‘#MOOC’ over the calendar year 2015 yielded a dataset of 243,267 tweets with 142,365 (59%) original tweets, of which 7% (16,584) were replies, and 100,902 (41%) retweets. The media, MOOC researchers and teachers, and large MOOC providers tended to be actively involved in setting the discussion agenda. Meanwhile we saw that learners are not as active in agenda setting as has been previously assumed.

Frequently appearing words in the tweets were identified in order to determine the most popular terms among users in the network (see Table 1). Among the most frequently occurring words we can see terms relating to promotional message such as ‘starts,’ ‘join’ and also, perhaps, ‘free’ – an interesting term to keep an eye on given the continued trend for more paid elements to MOOCs.

Table 1: Top ten most frequent words in the dataset

It was found that URLs were widely used and popular URLs shared in the dataset were identified, with several of the top URLs referring to MOOC course pages. The promotional nature of these tweets suggests more of an informational, rather than a social, network. Media stories (usually relating to new course launches or novel MOOC initiatives) also feature in the most shared URLs, highlighting the prominent role of the media.

What are the characteristics of tweets about MOOCs?

We sought to identify patterns of information flow within our dataset and identified eight peaks. These peaks largely revolved around the promotion of MOOCs, and tweets occurring in these surges often contained URLs referring to MOOC course pages. Unsurprisingly, these URLs were among those identified as the most frequently occurring in the dataset, reinforcing the theory that this is an informational network.

Six of the eight peaks related either to media stories about MOOCs or to the promotion of MOOCs by course providers. A media outlet is responsible for by far the largest peak and media actors also account for two of the other peaks, suggesting that the media plays a key role in setting the MOOC agenda on Twitter.

What are the sentiments of MOOC related tweets and what types of tweets about MOOCs are likely to contain sentiment?

The dataset has substantial number (55%) of neutral tweets. Positive tweets make up 38% of the total and the remaining 7% constitute negative tweets (see Figure 1). While learners are notably absent from most of the discourse in our dataset, they featured prominently in relation to sentiment analysis with almost all tweets with positive or negative sentiment coming from learners (see exemplar tweets below). This contrasts with the tweets occurring during detected peaks which are neutral in sentiment and informational in nature. 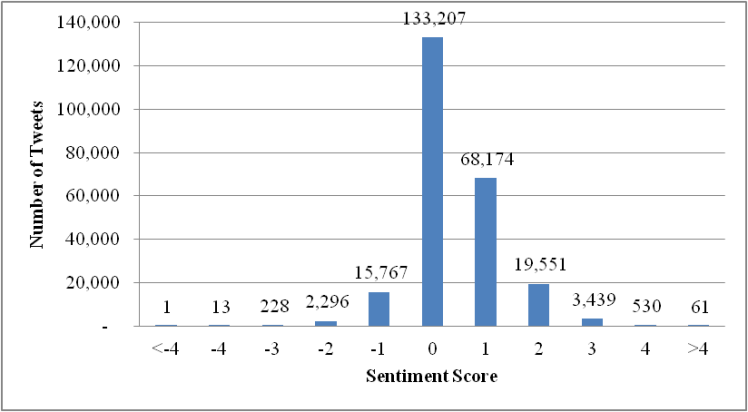 What are the characteristics of Twitter users who are discussing topics related to MOOCs?

There were 94,939 unique user screen names in the dataset.  The most active and visible users were identified. The activity of a user was calculated as the sum of the number of tweets, retweets and replies which each user contributed. The visibility of a user is defined as the total number of retweets and replies received by each user. The most active users are not necessarily the most visible users and vice versa (see Figure 2). Perhaps unsurprisingly the largest MOOC providers and promoters are both the most visible and the most active users

Figure 2: Active and visible users in the dataset

The MOOC discourse appears to be shaped in part by media or at least we can say that MOOCs and the media are deeply entangled. In our findings we see that media aggregators, commentators and disseminators are among the most active and visible users and are prominent in setting the agenda of the MOOC discourse online. The promotional nature of many tweets suggests this is an informational, rather than a social, network.

One set of actors who did not feature prominently in the findings are MOOC learners. It is legitimate to ask where they are, particularly as certain studies have, to some extent, assumed that MOOC discussion on Twitter involves many learners. Since we did not find evidence of this, we conducted a follow up study of 53,082 tweets containing the hashtags of specific MOOCs with high enrolments in which students and teachers are directly discussing a MOOC via its course hashtag. The term ‘MOOC’ occurred only 1,904 times, less than 4% of the tweets. We may infer that a learner is more likely to discuss a course using its actual course name rather than the type of course it is.

There is evidence to suggest that not all learners have heard of the term MOOC (even if they are studying in one). As such the term ‘MOOC’ may be problematic for use in defining networks of MOOC actors. Moreover, it may be that the term MOOC has particular currency only within particular communities e.g. MOOC researchers and providers rather than MOOC students.

Our findings contribute to the debate over who is setting the agenda on MOOC discourse by showing that learners are not prominent in ‘MOOC’ networked publics and in setting the MOOC agenda.

#MOOC Friends and Followers: An Analysis of Twitter Hashtag Networks